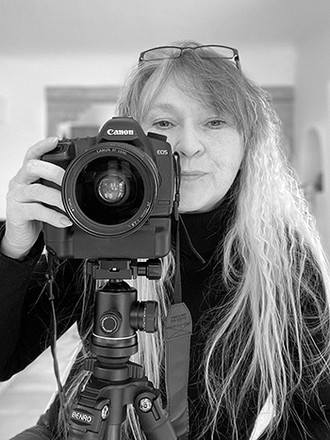 Mona Makela has expressed her passion for art all her life. Her art education began early in Helsinki, Finland where she attended the Waldorf School, an alternative education focused on the development of individual creativity, which profoundly influenced her. Mona was fascinated with her first camera at the age of six and has worked on the field of photography since 1986. She has also expressed herself through fiber arts, oil painting and as a jeweler.

Before becoming a full-time photographer Mona worked in Finland as a Research Assistant and later as an Assistant Meteorologist at the Finnish Meteorological Institute, and as an Environmental Engineering Field Technician in the United States. At the age 15 Mona flew sailplanes solo under instructor’s supervision before acquiring sailplane pilots license at the age of 16 and a single engine pilots license a year later at the age of 17.

In her former small hometown in rural Taos County, New Mexico Mona demonstrated her community spirit in her effort to establish a community organization in order to bring broadband internet connection to the area, which finally started streaming in September 2009. She also initiated the effort to bring public transportation to the area and the first scheduled bus picked up passengers in March 2015.

Since 2005 she has dedicated herself to photography full time. Out of 26,000 entries, her photo, “Morning Greeting,” was a finalist in the Smithsonian Magazine's second annual photo contest. Her photograph of John Suazo's sculpture was selected as the cover feature for Mr. Suazo's 30 year retrospective at the Harwood Museum of Art in New Mexico, and her photo of the Newspaper Rock in Canyonlands, Utah has passed through the hands of President Obama in the Federal Executive Order Report to the President.

Mona’s versatility as a photographer makes her work applicable to both personal and commercial projects. Mona will be glad to talk with you about your individual project. You may contact Mona Makela Photography by phone, 505-614-4876, or by e-mail.